For 2012, Caldwell Barefoot received the most votes of any family lawyer in the State in the balloting for Business North Carolina’s Legal Elite, which will result in his becoming a member of the Legal Elite Hall of Fame, an honor shared with less than ten other family lawyers in North Carolina. Lawyers across the state made their selections again this year for Business North Carolina’s Legal Elite, published in the magazine’s January edition. Statewide, 650 lawyers — about 3% of the total — were picked by their peers in 14 mostly business-related categories. Notices were sent to more than 20,000 active members of the North Carolina State Bar living in the state, directing them to the ballot on the magazine’s Web site, www.BusinessNC.com. Voters could not pick themselves, and they could select partners and associates only if they also select lawyers outside the firm in the same categories, with more weight given to outside votes. 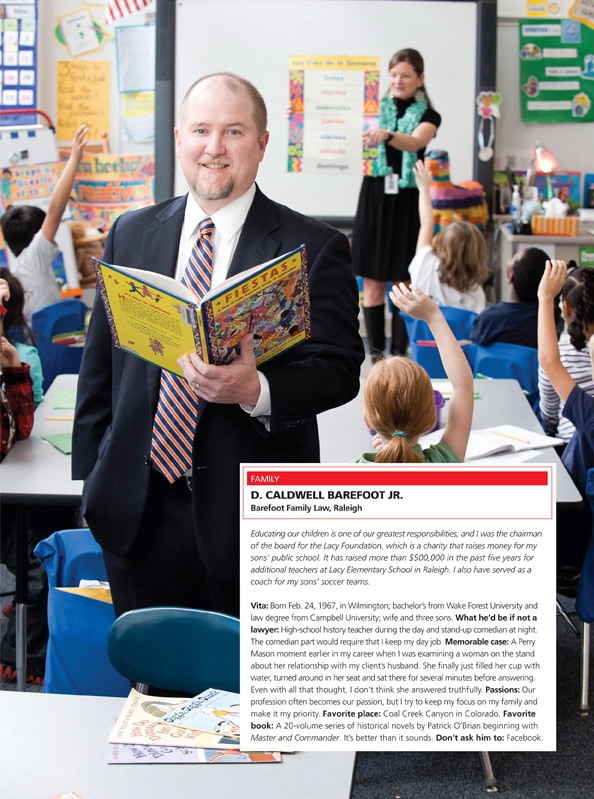 Caldwell Barefoot – most votes of any family lawyer in the State in the balloting for Business North Carolina’s Legal Elite.

Caldwell Barefoot has been appointed to the Grievance Committee for the Tenth Judicial District in Wake County. The Grievance Committee is part of the policing mechanism for attorney behavior and investigates complaints filed against attorneys before making a recommendation to the North Carolina State Bar.

Caldwell Barefoot has been appointed to be co-chair of the Alimony Committee of the North Carolina Bar Association’s Family Law Council. Among other things, the Family Law Council identifies areas where the law can be improved upon based on the practical experience of the members of the various committees and makes suggestions to the Legislature through the North Carolina Bar Association for revisions to improve our family law statutes.

Caldwell Barefoot presented at the North Carolina Bar Association’s Continuing Legal Education seminar on September 10, 2010 at the Grandover Resort in Greensboro, North Carolina, on the topic of the Ten Most Important Child Custody Cases in North Carolina history.

View us on Google Maps »